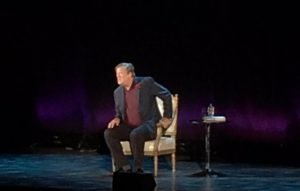 Stephen talking at the Hammersmith Apollo

Last night I went to see Stephen Fry – Heroes at the Hammersmith Apollo, a night of stories and mythology.

To a soundtrack of Hero by Mariah Carey, Fry walked on stage and settled into an armchair for an evening of story telling.

Stephen Fry’s retelling of the epic myths are clearly written, with a focus on the narratives.

Rather than just retell the stories, I want to explore three things he spoke about and link them to dramatherapy theory.

Hestia – Goddess of the hearth

Stephen Fry began by talking about the last of the Olympian gods – Hestia, who gave up her place on Olympus. Here is an extract from Stephen Fry’s book Mythos on Hestia:

Of all the gods, Hestia – ‘First to be devour and the last to be yielded up again’ – is probably the least well known to us, perhaps because the realm that Zeus in his wisdom apportioned to her was the hearth. In our less communal age of central heating and separate rooms for each family member, we do not lend the hearth quite the importance that our ancestors did, Greek or otherwise. Yet, even for us, the word stands for something more than just a fireplace. We speak of ‘hearth and home’. The word ‘hearth’ shares its ancestry with ‘heart’, just as the modern Greek for ‘hearth’ is kardia, which also means ‘heart’. In Ancient Greece the wider concept of hearth and home was expressed by the oikos, which lives on for us today in words like ‘economics’ and ‘ecology’. The Latin for hearth is focus – with speaks for itself. It is a strange and wonderful thing that out of the words for fireplace we have spun “cardiologist’, ‘deep focus’ and ‘eco-warrior’. The essential meaning of centrality that connects them also reveals the great significance of the hearth to the Greeks and Romans, and consequently the importance of Hestia, its presiding deity.”

Fry spoke about the hearth as a gathering place where stories are told. He sat onstage in an armchair and invited us to imagine that hearth as we explored the stories of some of the Greek heroes including Perseus, Heracles, Atalanta, Daedalus and Icarus.

I thought about my training in dramatherapy where we would often start and finish the learning gathering in a circle around a candle. This central light was a focus which was passed around as we verbally processed what was on our heart. At the end of the training, our tutor Pete Holloway spoke about the ritual model of dramatherapy which is so central to the training at Roehampton, what we have actually paid all the tuition for is that circle. In other, words the economy of the training comes back to that central focus or heath.

Fry looked at the god Dionysus (Greek) / Bacchus (Roman) – the impulsive got, gut lead, all about desire and pleasure and instinct.
He juxtaposed this with the god of Apollo (Greek & Roman) – the god of reason, wisdom, rationality and the mind.
He said that by including both of these gods in the pantheon, the Greeks understood that, on their own, both were wrong. Fry compared this to Star Trek where there were there are civilisations and crew members who were all instinct (such as Bones), and civilisations and crew members who were all reason (such as Spock). As in the Greek myths, as in Star Trek, and as in life – we need a balance of the two.

This was one of the first things emphasised in the course. In our first module Therapeutic Stories, our tutor Rebecca Blake would open with a meditation about our gut, heart and mind, asking “are they aligned”.

I know this aim is shared across many dramatherapy styles:

‘if the Sesame method does not “cure”, what does it do? It helps people to come to terms with their difficulties through getting to know themselves better. It is likely to create harmony where there is chaos. It helps to create an inner balance. It does so because we aim to help people to discover balance in movement; balance through the use of myths, legends and fairytales; balance in the Jungian sense, created by the tension of the opposites. It is a part of a process.’ (Lindkvist, 1998: 59)

This first lesson rippled through the training, exploring all the ways we get in our own way and stop this inner alignment. The defences, the conflicting parts, the demon of resistance. Slowly the Roehampton training addressed each one and returned to the question of alignment.

To conclude the evening, Fry spoke about the emphasis in many of the stories about personal development and progress. He noted that many of the children in the stories become greater than their parents as the heroes strive for self improvement and development. His closing thought was that we could each search for the hero inside ourselves, that part which reaches forward.

This also mirrored the journey of the Dramatherapy training where one of the concluding modules followed the structure of Joseph Campbell’s Monomyth through Paul Rebillot’s Hero’s Journey: The personal call to adventure where we are each invited to find our own heroic self.

As my tutor Anna Seymour said about using dramatherapy where clients can:

‘learn about the paradoxical nature of life – that it is possible to feel afraid and be a hero, that the strong can cry and beauty and pleasure can be found where we least expect it.’ (Seymour, 2009: 31)

Stories in dramatherapy can open up so much of our inner psyche. Our longing for greatness, our trials, our conflicts, our heroic quests. Their exploration can also help us to understand our own conflicting instincts and reason and to search for our own inner balance and integrated hero.